My sister is at a wedding, so I’ve offered to have her dog for the day, but when the dog turns up he’s got a large bag and enough food to last the month.

“He’s staying for a few days then?” Chris asks, taking the bag and lifting it onto the table.

“It looks that way,” I say. I give the dog a little pat and take his lead off. He wags his tail, then jumps up at me his nails catching on my tights. “Down,” I say, but he just jumps higher, like it’s a game we’re playing. “Get down,” I say in as stern a voice as I can muster.

Our dogs peer into the kitchen to see what the fuss is about. And when my sister’s dog spots them he turns and starts chasing them round the kitchen into the living room, down the hall, then back again.

Our dogs are older, a geriatric 10 to his two. They stare at him like he’s from another planet, then go and hide.

“They’re too old,” I tell him. Feeling a bit sorry for him, I let him into the garden and spend five minutes chasing him around, until he pees up one of my new plant pots and I decide enough is enough. We go back inside, and he runs straight upstairs.

“He doesn’t know the rules,” I say, running after him while our dogs stand at the bottom of the stairs because they are good boys and know that upstairs is out-of-bounds.

“Bloody hell,” Chris says coming up behind me. “Not even I’m allowed in there.”

The dog looks at us, saliva drooling from the corner of his mouth onto the pristine pages.

Chris pulls a dog treat from his pocket and the dog drops my book. It’s covered in drool and teeth marks.

“Shall we go for a walk?” I suggest. “Get out of the house before he does any more damage.” 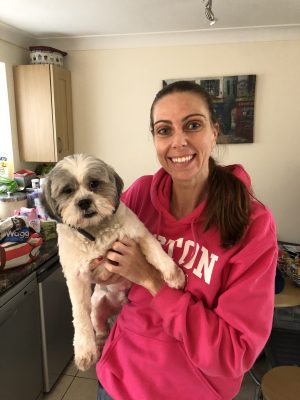 We decide to walk through the woods to avoid other dogs and people because the dogs aren’t good with other dogs and we’re not good with people. We do a few miles then loop back. It’s quiet, no-one else around, but then I hear a twig snap. I look over and see a man crouching next to a tree. He’s holding a rifle and looks like he’s going to shoot.

“There’s a man with a gun,” I whisper, trying to go unnoticed, but with two Miniature Schnauzers and a Shih Tzu we’re a bit of an easy target.

“I know!” Any minute now I’m expecting a bullet to come whizzing towards my head. The man lifts his rifle up at the tree, takes aim. I realise he’s after the birds. Why does he want to shoot birds? What kind of person murders innocent birds for fun? I have to distract him, let the birds get away.

The shooter coughs back three times. “I know you’re there. I’m not going to shoot you.” He sounds cross.

We walk on but have only gone a few strides when we hear the shot of his rifle, followed by the flapping of wings.

“What a bastard,” I say and start making as much noise as I can, on a mission to help every bird in the area. I wave my arms and shout. My sister’s dog starts barking and running around. More birds fly off. “Good boy,” I shout. “Good boy.”

There are a few more shots, in quick succession, and they sound like they’re getting closer.

“Look sharp,” Chris says. “We need to get out of firing range.”