I wrote this piece back in 2015 when Olivia was only two. As part of my university module on contemporary literature I had to write a response to Kathleen Jamie’s Sightlines, focusing on moments of time, a theme of the book, and publish it on the course blog. I had hopes of writing a poetic and thoughtful response, unfortunately, Olivia had other ideas.

My intention was to write my blog post last Saturday. I didn’t have any plans so I was looking forward to an afternoon of writing. I’d just got back from my morning run when my sister called. She’d managed to get a last-minute appointment at the hair dressers, and would I mind babysitting for my two-year old niece.

‘No problem,’ I said thinking it wouldn’t be. I packed up my laptop, and drove to my sister’s house.

Olivia was watching Peppa Pig when I arrived. ‘Miss Rabbit’s putting out the fire,’ she said, her eyes fixed on the screen.

‘Olivia, I’m going,’ my sister said. When Olivia didn’t even look up, my sister turned to me. ‘I’ll just sneak off then.’

I was closing the door behind her when she suddenly remembered she needed to tell me something. ‘I might be a bit longer … I’ve got to call into town on the way back, and Halfords for the car seat.’

Olivia was still watching Peppa Pig so I set up my laptop and started writing, trying to produce something wonderful about a particular moment. I’d managed to get a few sentences down, nothing wonderful, but at least it was something.

Olivia jumped out of the chair and started running. ‘Fire!’ she shouted. ‘There’s a fire!’

I glanced round in case the house had gone up in flames without me realising.

Olivia was holding a pretend phone to her ear. ‘There’s a fire. We need the fire engine.’ She ran out of the room. I pressed save on my laptop and was just about to follow her when she came back in riding a toy sweeping brush like it was a broomstick.

‘Where’s the fire,’ she said. ‘I’ve come to the rescue.’ She was making a strange noise. ‘NeeeNaaaaNeeeNaaaa.’ Then she jumped off the sweeping brush and pointed it at the pretend fire, which was in the corner. She made another strange noise. ‘Sssssshhhhhhsssshhhh.’ She looked up at me.  ‘It’s okay. I’ve put it out.’

‘That’s a relief,’ I said thinking that would be the end of it.

I picked up the pretend phone. ‘It’s an emergency. Can I have the fire service please?’

‘Knock,’ Olivia said. ‘Knock when there’s a fire.’ And she ran out of the room, closing the door behind her.

I went back to my laptop and tried to write another sentence. She started banging on the door. ‘Is there a fire?’

She opened the door and peered into the room. ‘There is. It’s there!’ In a second she was back on the sweeping brush and heading for the fire.

After three or four pretend fire incidents, I thought she would get bored. Nothing usually held her attention for more than a few minutes. Almost two hours later and she was still going from one fire to the next. She’d rescued a few bears along the way. There was a big bear and a little bear, but everyone was rescued and put on the sweeping-brush-fire-engine and taken to safety.

‘A fire?’ And this time when she turned to run out of the room to deal with what must be the hundredth fire incident, she wobbled and almost fell over. Exhaustion was setting in.

A few minutes later and Olivia was sleeping. She lay in her bed, her arm around her bear. The sweeping brush was propped against the wall.

I sat on the rocking horse listening to the sound of her breathing. It was late afternoon and getting dark. My eyes felt heavy. I watched her for a while then tiptoed downstairs into the kitchen. I filled the kettle with water and sat down.

I hadn’t written anything. The kettle boiled and clicked off. I couldn’t write now. I was as exhausted as Olivia. I sipped my tea and looked out into the garden and the field beyond.

Olivia was almost three. Every time I saw her she changed. She was like a little girl now, not a baby. Her hair was long enough to scrape into a ponytail. She was getting taller, learning new words, trying to write her name. It was all happening so fast.

When she was a baby we’d been desperate for her to roll over and crawl and then walk. At every stage we’d wanted the next one. Now it was hard to even think of her as a baby, and I wanted to go back and remember.

This new phase was exhausting, but interesting – the innocence and imagination and enjoyment of play. There is something special about how a child creates new scenarios and scenes and characters, getting lost in their imagination.

But time marches on and within no time at all Olivia will be heading for the tunnel of adolescence that Kathleen Jamie refers to in her book. When Olivia is slamming doors and shouting and complaining about the unfairness of life, we’ll remember how lovely she used to be when she was a toddler.

I was finishing my tea wondering how long it takes to get your hair coloured and styled when I heard a little voice. ‘Auntie Liz. Is there a fire?’ 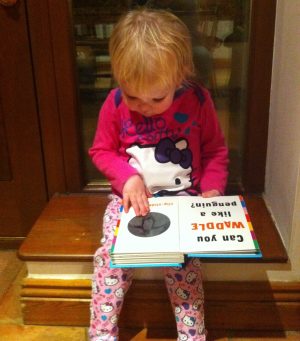